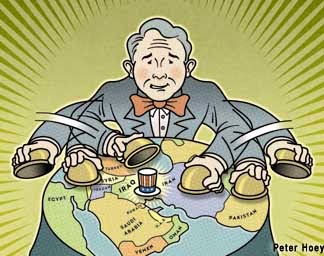 Imagine it's six months from now. The Iraq war is over. After an initial burst of joy and gratitude at being liberated from Saddam's rule, the people of Iraq are watching, and waiting, and beginning to chafe under American occupation. Across the border, in Syria, Saudi Arabia, and Iran, our conquering presence has brought street protests and escalating violence. The United Nations and NATO are in disarray, so America is pretty much on its own.

Hemmed in by budget deficits at home and limited financial assistance from allies, the Bush administration is talking again about tapping Iraq's oil reserves to offset some of the costs of the American presence--talk that is further inflaming the region. Meanwhile, U.S. intelligence has discovered fresh evidence that, prior to the war, Saddam moved quantities of biological and chemical weapons to Syria. When Syria denies having such weapons, the administration starts massing troops on the Syrian border. ...

Practice to Deceive. Chaos in the Middle East is not the Bush hawks' nightmare scenario--it's their plan. By Joshua Micah Marshall, Washington Monthly, March 30, 2003. Rense.com