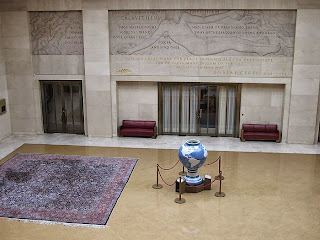 you are talking about the historic marble carving by sculptor Eric Gill at the UN’s European headquarters in Geneva, called “The Creation of Man”, donated on behalf of the British Empire to UN's forerunner the League of Nations in 1938 by Lord Robert Cecil (1865 - 1958), representative of His Majesty King George VI. You are complaining about the covering of the naked man by UN authorities, whom you are accusing of  “kowtowing to a fundamentalist regime”.

Unfortunately you are misinterpreting UN's gesture completely. You may have noticed in front of the relief the display of a Persian carpet as a sign of permanent appeasement to the Islamic Republic of Iran. Iranian or other Muslim delegations, groups or single guests' regards are always diverted from the odious representation at the upper part of the wall down to the floor with the beautiful carpet, something like a Heriz rug or the like. This wise decision was several years ago taken by UN administrators to avoid any probable religious attacks against the cock, pecker, willy, willie, schlong, whanger, peter, winkle by offended Muslims.

In my opinion the veiling of the historic carving has not at all been decided in deference to Iran's fundamentalist sensibilities but for the simple reason of protecting the hall. Dealing for a long time with Muslims they know them inside out. Let me explain my own exprerience in the sixties:

As a guest of an employee of the German Archaeological Institute Istanbul I was told many stories, something like 1002nd and third and fourth of the Arabian Nights. One was about the two coffers found by German scientists. Opening the coffers, they found numerous cocks, peckers, willies, schlongs, whangers, peters, winkles belonging to Greek kuroi from archaic, classic and Hellenistic times chopped off at the Sultan's strict order by devout Muslims in the Ottoman Empire when conquering the Byzantine Empire i.e. the Greek Ionia.

And as the aficionados of Frederic II the Great in Berlin did with his statue due to be melt, the conservators did not follow order until the end but put the cocks, peckers, willies, schlongs, whangers, peters, winkles all together into the coffers where they were found more than 500 years later by German scientists, who swarmed out to the country, our days' West Turkey, trying to find which cock, pecker, willy, willie, schlong, whanger, peter, winkle was fitting to which kuros.

You see, Mr. Neuer, the UN staff had good arguments to veil the one cock, pecker, willy, willie, schlong, whanger, peter, winkle. It's protection of European heritage against the Muslims and their well known reactions. So calm down! Islam is peace!